"Hot enough for ya?" is the kind of thing annoying people say when they want to get punched in the face. Yes, Ned, it was hot enough for most of America last week; more than 3,800 record highs were recorded across the country as temperatures soared and sizzled in the 90s and 100s across much of the nation. In considering how our local sports teams have resembled this heat wave over the past week, we must remember and assign value to the good things associated with high temps (Kiddie pools! Free sidewalk grilling!) with the less good things (Drought! Excessive heat warnings!) To the recaps:


Minnesota Twins: The Hometown Nine entered the All-Star Break on the skids, frittering away late leads in two of their last four games before a four-day respite. Now 13 games under .500 and stuck with the second-worst record in the majors heading into the season's second half, ace Twins blogger Aaron Gleeman concluded through analysis that we could possibly trade half our roster to bring back a dozen or so marginal prospects. So we got that goin' for us.

In other news, Joe Mauer entered Tuesday's All-Star Game rather late, went 1-for-1 with a single, was forced out at second base on a fielder's choice. He proceeded to crack a slight smile, then probably flew home and had a good sit in a comfortable chair for a while.

Heat Wave Doppelganger: America's corn crop--A big chunk of America's corn and soy crop is wilting away in the summer swelter right now, which may cause worldwide prices for the staple crop to rise. Kind of like how the Twins payroll has swelled into the triple millions of digits, and fans feel like they have little to nothing to show for it.

Minnesota Timberwolves: David Kahn, the President of Basketball Operations who easily has the most fun last name to elongate loudly in the entire NBA, has had a busy week of wheeling and dealing. His re-shaping of next year's roster is likely close to complete. Time will tell if these changes will transform into the greatness with which USA Olympic Basketball team member Kevin "Greatness" Love would prefer to surround himself.

The Wolves reportedly have deals locked up with a couple 2-guards: "Russian Rubio" Alexey Shved (check him out in the Olympics playing for the Russian national team in a couple weeks) and former 3-time All-Star--and current retiree--Brandon Roy. As of this posting, various media outlets have reported Kahn trying to come to terms with the Blazers on one of several variations of a sign-and-trade deal for small forward Nicolas Batum, and the Wolves' other signings (Greg Stiemsma? Jordan Hill? Another SG/SF if Batum falls through?) are largely contingent on who ultimately gets sent where in this potential deal.

Heat Wave Doppelganger: Montgomery County, Maryland--When a powerful "Derecho" line of thunderstorms blew through this wealthy county that sits just northwest of Washington D.C. two weeks ago, almost a half-million residents lost power for several days, and dozens of trees were felled, causing traffic tangles aplenty. Motorists were forced to use extreme caution and improvise detours to get around blocked roads--just like the Wolves may have to do if no sign-and-trade for Batum occurs and the Blazers match the Wolves' offer sheet for the restricted free agent.

Minnesota Wild: Owner Craig Leipold celebrated America's 236th birthday by busting out the checkbook and laying down $196 million--or, $12 million more than Joe Mauer's making in his eight-year contract--to score the two biggest free agents of this NHL offseason. Stud left winger/Minnesota native Zach Parise and one-half of last year's best defensive pairing in the league, Ryan Suter, left the Eastern Conference champion Devils and Predators respectively and agreed to matching 13-year, $96 million deals. They have now essentially become members of the Wild for the rest of their careers.

The moves should both bolster a woeful offensive attack that generated the least goals per game last year and strengthen a defensive unit that played better than expected in 2011-12. The signings have also re-sparked a level of interest in the team that had waned over the previous few playoff-free seasons, as the Wild reported selling more than 1,500 season tickets in the 72 hours after the announcement of the twin contracts.

Heat Wave Doppelganger: Lansing, Michigan--An all-time high temperature for Lansing (103 degrees) was recorded on July 6. Just as the mercury in those famous Lansing thermometers (huh?) rose to as-before-unseen levels last week, so too should both the passion for--and the pressure on--the Wild to perform well next season be at an all-time high (provided the season ever gets going. Lockout: Part Deux, anyone?)

Minnesota Vikings: Anything we could say about what happened with Adrian Peterson at the Live! at Bayou Place nightclub in Houston last weekend would be pure speculation, considering how widely the police report of the night's events differs from the narrative forwarded by Adrian's recently hired hot-shot lawyer Rusty Hardin. So instead, I'll just wish Adrian the best of luck in his ongoing recovery from his knee reconstruction surgery and point out that we are 15 days from the start of the Vikings' 47th Mankato Training Camp (scheduled to appear: Percy Harvin! And other football players!). 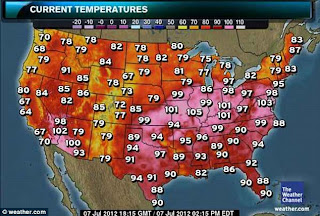 Heat Wave Doppelganger: The Pacific Northwest--Compared to the huge moves being made and considered by our winter sports squads this week, Adrian's episode with the police was relatively played down and under-reported by most national media outlets outside of TMZ. On Sunday, the day after the incident, its corresponding story was listed second from the bottom on ESPN.com's headlines. And according to analysis at the Daily Norseman blog, the most Adrian would even probably face even if he pled guilty is some sort of small fine. (Granted, such a plea is unlikely given his hiring of hot-shot attorney Rusty Hardin this week to help fight the charge and clear his name.)

Interesting news pertaining to any other members of the squad has been virtually non-existent this week, lending to the Pacific Northwest comparison, as the Washington/Oregon coasts were seemingly the only spots in the country last week where you wouldn't have suffered second-degree burns by touching a sun-exposed surface in your car last week.
Posted by Bruff McGruff at 11:40 PM