This Was Supposed To Be The Winter of Sports!: or, Fun With Limericks

(The following is a combination of truths and fictions relating to the origin of the limerick—a rhythmic, five-line poem structure—and the current states of affair for our local sports teams. Please consider all of the following limerick-related information in the same manner as you would any recent victory from any of our local squads: with a grain of salt and a swift retaliatory kick in the nether regions.)

What high hopes we had just two months ago. Buoyed by All-Star Kevin Love’s early return from a broken hand and the prospects of soon-returning magic man Ricky Rubio, the Timberwolves were in playoff contention with a 13-11 record after a victory over Oklahoma City. The Gophers basketball team posted a couple impressive non-conference victories at the Battle 4 Atlantis and was playing up to their elevated talent level and expectations for seemingly the first time in the Tubby Smith era. The NHL was just a few weeks away from ending its lockout as fan excitement levels increased in anticipation of seeing Zach Parise, Ryan Suter, and a new-look Wild. And Golden Gophers hockey was tops in the nation, in the middle of a 10-game unbeaten streak that stretched from the beginning of December until January 19th. 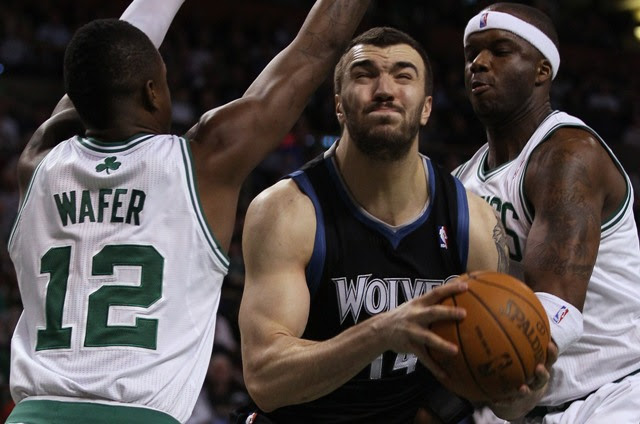 One of those four teams has seen that early success through into the dead of winter.
Since that 13-11 high-water mark, the Wolves have gone 6-20 to hit the All-Star break at 19-31, five back in the loss column from a playoff spot. Love re-broke his hand, several swingmen sustained season-ending (inadvertent alliteration!) knee injuries, and there have been many games where you could make a potent starting lineup out of the guys in suits at the end of our bench. Rubio’s play has improved as of late, but the Wolves have had to give out too many minutes to French Don King.

The Gophers have continued their annual Tubby Tailspin mentioned here a few weeks ago, with an embarrassing 21-point loss to Iowa coming after a dance party-worthy victory over the hated Badgers and dropping the squad to 6-7 (and out of the Top 25 rankings--probably--for good) in conference play. The team remains completely flummoxed by the most basic of zone defenses and incapable of cleanly executing some of the most rudimentary offensive sets you’ll see this side of a 7th-grade tournament at Hoover Jefferson Middle School. “Set one pick and eight perimeter passes leading to a contested 19-footer” isn’t a winning offensive formula, gentlemen.

Though their record looks respectable at 7-6-2, the Wild have disappointed those who hoped for a more high-flying, run-and-gun offense to take charge in coach Mike Yeo’s second season. Parise flies around like a Tasmanian devil, but he seems somewhat wasted in a dump-and-chase offense with teammates who seem to enjoy spending 95 percent of their time in the attacking zone along the half-walls scrummin’ and chummin’. Plus, the Wild’s road win in Calgary nine days ago was, I think, their first road victory since the 08-09 season. At least the Gophers hockey team has lived up to the hype surrounding their squad since guys like Kyle Rau and Nick Bjugstad announced they would return for their sophomore and junior seasons, respectively. The Gophs have been ranked among the top two in the Pairwise Rankings for most of the season, and Finnish junior Erik Haula has been sensational in leading Minnesota in points for the second straight season (13 G, 24 A so far this season). Freshman goalie Adam Wilcox has been one of the nation’s best between the pipes, letting in less than two pucks per game and maintaining a ridiculous .919 save percentage.

I think it was, um, Sir Chauncey Limerick, a printing press operator from the hills just outside of......a guess here, but I’m going with Limerick, Ireland, who invented the naughty poetic styling of his, uh, namesake. And also native land. Sir Chauncey got caught up in a vicious back-and-forth with rival publisher Albert Blarneystone around the time of our Civil War. Chauncey eventually bested his nemesis with his first “limericke,” a linguistic creation that forever linked Blarneystone’s name with naive tourists who would kiss a pissed-upon rock in the Cork countryside. It was also blamed for an 1863 outbreak of the vapours among dozens of womenfolk in the greater Limerick area.

A certain man from Nantucket could confirm that the limerick has been the weapon of choice for the nastiest, raunchiest, and most depraved poets of the past 150-ish years. The best limericks are those that dissect taboo topics with a kind of satirical subterfuge, that tell truths about the scummy side of the people and world around us, preferably through utilization of the sailor’s language.

This is a family website (?), so don’t worry about shaking any kind of ban-stick my way as the language in the limericks below will fall far short of causing The Great Vapours Outbreak of 2013. But sometimes, when you’re a little disgusted at the products being offered by your hometown team, you have to blow off a little limerick steam.

For the franchise from First Avenue.

But the season went south

When Love shot off his mouth

And bewildered this tight lupine crew.


With the brilliance of one Zach Parise


We were s'posed to make winning look breezy


But you can't dump and chase


When you're standing in place


I'd rather watch old folks, all wheezy.

With an offense described best as "ambling,"


And the seniors' eyes on future damn bling...


Sure, the defense is fine;


When you're scoring 'bout nine


Points a half, then it's tough to beat Grambling.


The forwards with dozens of snipes


Build leads as the Zamboni wipes.


If the stars leave their lines


As the Big Ten aligns,


Thank God for that kid in the pipes.
Posted by Bruff McGruff at 10:30 PM