Less than 24 hours after the Golden Gophers basketball team’s season-ending defeat in a 78-64 against a strong Florida Gators squad, Minnesota athletic director Norwood Teague flicked the lights off for the Tubby Smith Era of Gophers hoops.  The local media has approved the move for the most part, while the national folks have lamented the pink slip received by one of the good guys in college basketball and decried Teague’s and the program’s aspirations to become something more than a second-and-a-half-ish tier team in a big-time conference. Come on, they say. Count your blessings. You’re Minnesota. You’re located in the nation’s hinterlands, and you’re about as big a basketball powerhouse as McDonald’s is a place to get great ribs. You just fired the best thing you had going for you.

Well, they’re stupid for saying that. Every top program in the Big Ten right now recently went through a prolonged period of suckitude (well…save for Michigan State) before reclaiming a place among the conference’s elite. Indiana was 28-66 Tom “The Sixth Man” Crean's first three years as coach as he cleaned up the mess from Kelvin Sampson's recruiting violations. Michigan had an 11-year drought between tournament appearances from 1998 to 2009. Wisconsin was outright TERRIBLE for nearly 50 straight years before this freak showed up. (Next time you're trying to find a scary movie to watch and nothing in the local Redbox is catching your eye, just do a Google Image search for Bo Ryan and be prepared to recoil in horror.) And last time I looked at an American atlas, all of these campus locales had crappy winter climates as well. Point being, we shouldn’t have to eschew our aspirations of being a top (or at least close-to-top) tier team in a top tier conference just because recent history suggests we should be happy with middle-of-the-pack conference finishes.

But I wanted to eulogize Smith as Gophers basketball coach, to reflect upon the Tubbystache and the post-victory dancing, the confused expressions and calling-out-of-underachievers. It was a little six-year slice of somewhere between purgatory and heaven that we referred to as Tubby Time.

I still remember that first round of semi-baffled elation upon hearing the news that we were replacing Monson and Molinari with a cool coach with a cool name and national championship cred. Hiring Tubby gave the program an instant respect boost, fired up the fan base, and led to some highly lauded lands in recruiting, especially early in Smith’s tenure (The 2008 class was a top-20 one according to ESPN and featured Sampson, Joseph, and Iverson). And to his credit, Tubby took some rather rag-tag squads those first two years and made some noise as occasional giant-slayers, like when Blake Hoffarber daggered the Hoosiers with a turnaround elbow hook thing at the buzzer in the 2008 Big Ten Tournament. He made an 8-win team into a 20-win squad in his first year here, and he managed to win at least 20 games five of his six years here. In that time, he ended with a 124-81 record overall but a 46-62 record in conference, never placing better than 6th in the Big Ten. 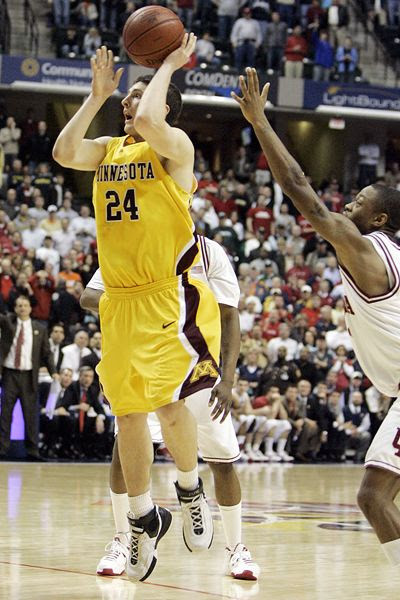 This year’s tourney trip had been Smith’s third appearance in the NCAA big bracket in six years of steering the good ship Gopher, and his teams’ performances, both on and off the court, throughout his time as coach could be described as simultaneously uneven and predictable. For every signature win over #1-ranked Indiana this year or #9-ranked Louisville on a neutral court in 2008, there were two or three bewildering losses where the team either looked befuddled by zone defenses at Iowa or Northwestern, or simply looked like guano against Purdue or Nebraska. ESPN’s Bubble Watch called this year’s Gophers squad “hilarious” because of their inability to grasp any kind of consistency. We could literally beat anyone and lose to anyone this season, making us predictable in our unpredictability, I guess.

But I like roller coasters, both literal ones and figurative sports metaphor ones. And in a market where playoff appearances have been hard to come by the past six years, even those back-door 10- and 11-seed tourney berths gave us a couple days of hope each year. I was one of those fans who you could catch in those four days between Selection Sunday and the start of the tournament saying things to other fans like “Well, if Ralph can just play mean against Dexter Pittman…” or “If Blake can get hot and offset Jordan Crawford’s scoring…” Tubby’s ability to recruit talented, athletic players to Williams Arena gave us the ability to do so.

It’s impossible to talk about Tubby’s six years in the Twin Cities without mentioning the ones that got away; a handful of Smith’s recruits either never played a minute for the Gophers due to off-court struggles and suspensions or transferred to other programs because of disagreements with the coaching staff, playing time issues, or their diminished roles on the team. Royce White, Colton Iverson, and Justin Cobbs all became key components of other teams that won games in the NCAA tournament, and Devoe Joseph almost led Oregon to a tourney berth last year. (Paul Carter also left the program, but he did so because Paul Carter is a selfless young man.

(Side note: Other Minnesotans—like South Dakota State’s Nate Wolters, Bucknell’s Mike Muscala, and Harvard’s Siyani Chambers—played large roles in getting their teams to this year’s tournament. But these these three in particular were rather lightly recruited coming out of high school.)

But I can’t even really fault Tubby for any of this, either. One of the big reasons former AD Joel Maturi hired him was because of Tubby’s penchant for running clean programs, which was a major selling point to a university still looking to reclaim relevance in the wake of the vacated Clem Haskins years. By all accounts, Tubby did just that over his six years here, graduating a higher percentage of his players than we had in the past and ridding the program of problem children (Trevor Mbakwe being the large exception) before they may have had a chance to do more serious damage to the program. And the fact that he had a handful of guys transfer just isn’t that uncommon in Division I basketball anymore, where a whopping 40 percent of players don't finish their careers as part of the team with which they signed their original letters of intent.

The two major indictments I would level on Tubby’s tenure involve his team management—both of the men that stuck around and of in-game situations. We had a running joke during Ralph Sampson III’s time on the team where, as a freshman, it seemed as though every time he took a mid-range jumper, the play-by-play man would make a comment along the lines of “Here’s Sampson from 15 feet; he can hit that!” Or, “That’s in his range!” Of course, Ralph shot about -12% from outside of 10 feet as a freshman. But even though announcers kept bringing up that factoid about his high school scouting report all four years, he still shot about -11% from mid-range as a senior. The guys that stayed in school and at Minnesota should have been improving within their time in the program. Outside of Damian Johnson and maybe Dre Hollins, nobody ever seemed to take any kind of visible leap from the kind of player they were when they accepted their scholarships into something more.

The other problem I had with Tubby had to do with the recurring habits and losing behaviors that would crop up in almost every Big Ten road game some in-conference home games against better opponents. His half-court offensive sets—usually some variation on a flex-style offense—were usually atrocious for about 30 minutes out of every 40-minute contest. They often devolved into the setting of one pick followed by six perimeter passes and some guard (or, God forbid, Rodney) chucking a contested 16-to-20-footer. He seemed slow to transition out of adjustments that just weren’t working, as we saw during the 2-3 zone experiment that turned into The Mike Rosario Show in the Gophers’ tournament defeat against Florida. And he maintained an unwillingness to shorten his bench, even in situations that reeeeeeally called for a shortened bench (Oto Osenieks and Mo Walker should not have been getting any minutes in any tournament game, ever).

Tubby also had the curious (and rarely-seen in today’s big-time basketball) propensity to call out underperforming players by name during in-game interviews and post-game press conferences and to essentially “call it like he saw it” regarding his players’ performances. He took some heat locally for basically calling his team a bunch of losers after one game earlier this season. But I always thought this to be part of the growing process, both as players and as men—to be able to take criticism from your superiors and use it to make yourself better at your job and in other aspects of life. Forgive the overuse of clichés in this paragraph, but I usually enjoyed Tubby’s willingness to call a spade a spade. It somewhat made up for the irritation I would feel toward confused-face in-game Tubby.

Reports have indicated that Teague has already been rebuffed by VCU’s wunderkind Shaka Smart and Iowa State’s Fred “The Mayor” Hoiberg, as both coaches have leveraged other schools’ interest to get better, longer deals at their current positions. Also, the Gophers apparently had talks with Florida Gulf Coast’s coach Andy Enfield, but the millionaire architect of Dunk City and his supermodel wife decided to take the open position at Southern Cal instead of trekking to the hinterlands of Minnesota. Who saw that coming?

So it might seem like the Gophers are well on their way to another “Jerry Kill 5th-choice” hire, which probably won’t do much to quell the current unease within the fan base. Other names that have surfaced around the interwebs as potential candidates are Alabama’s Anthony Grant (Smart’s predecessor at VCU), Wichita State’s Gregg Marshall (whose price tag keeps going up with every Wichita State tourney win), and—in a real long shot—VCU assistant coach Will Wade. I hope we get Marshall, personally, but I’ll be happy with almost anyone not named Kevin O’Neill or Matt Doherty.

Meanwhile, Tubby looks ready to take on another reclamation project; reports have him ready to be installed as Texas Tech’s new coach (though Tubby says some really nice things about Minneapolis in the video within that link) as they try to dig out from underneath the rubble of the Billy Gillespie disaster. Texas Tech is coming off an 11-20 season prior to which Gillespie resigned for "medical" (WARNING: Having 15 players transfer in the 18 months you're a coach of a D-1 program can cause hypertension) reasons.

Teague seemed to have all confidence that he could find a coach to take the Gophers to a place Stevie Wonder sang about, and he has the connections through the Villa 7 network that he helped create to unearth another Shaka-like gem from the current D-I coaching ranks. So I still have confidence that his hire will be a good one. But as this search drags out into its second week, the more it seems to be just turning into yet another roller coaster that we as a fan base have to ride out together, praying that we’ll be greeted at the end by a ride operator who carries himself more like a conductor than a bored college kid waiting to pick up his paycheck. But that’s okay. As was previously mentioned, I like roller coasters.

Posted by Bruff McGruff at 6:37 PM