Did I Miss Anything? Gophers-Stanford NIT Championship

In which your narrator turns off a Minnesota sports contest in disgust, purporting to know enough about the team and its players to fill in a rough sketch of what probably happened during the rest of the game. 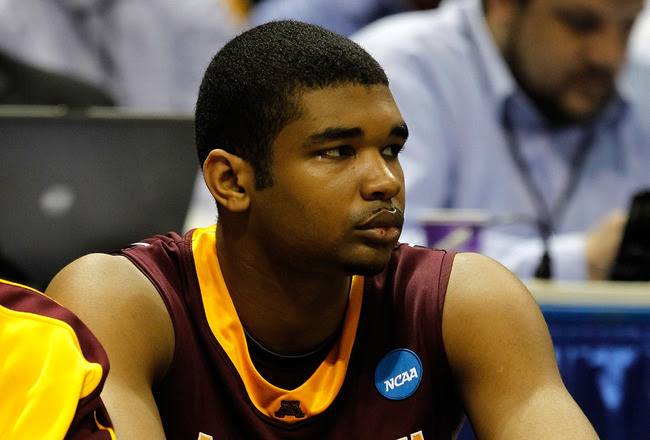 The situation: Stanford led 44-28 with 13+ minutes left in the game.
The catalyst: Andre Hollins bricks one 3-pointer, then air balls another in a 3-second span.
My roommate, Tony, farted, then said, "Excuse me, I just Gophered." I asked if we could watch something else.


I've seen enough mopey, disinterested shots of Ralph "Sad Sack" Sampson III for the rest of his and my careers. And I've seen enough Tubbyball over the last 5 years to know what this half-court offense looks like when its players sense that they're up against any slight adversity. A speculative two dribbles inside the arc, pull it out, and pass on the perimeter. Repeat times 6. When the shot clock gets down around 8, pull your big man (and best chance at an O-board) off the block to set an ineffective pick and take a contested 17-and-a-half-foot jumper. Run back on defense.
What a waste of time and money for the three rows of die-hard Gopher fans and players' parents who made the trip out to New York.
So unless we could force the action by creating a couple turnovers and easy baskets (unlikely, given the breakneck pace at which our own turnover line was increasing), this game was already all but decided.
So I'm just guessing here, but Elliott "Dork Nowitzki" Eliason probably looked really futile in trying to stop some slashing Stanford wingmen that had no trouble penetrating past Chip n' Mav, the Danger Rangers (not to be confused with Chip n' Dale, the Rescue Rangers). Dre Hollins probably tried really hard to get us back into the game for the 40 seconds at a time he was in before picking up his nth foul. Tubby Smith probably made one of these three faces a lot. And ESPN probably watched their ratings crater to the point where some executive probably issued a 6-month moratorium on covering all Minnesota contests until the stank that this game left on the flagship station washes completely clean.
"I hope we play these guys right away next season and Mbakwe stomps all over that big skinny dude," Silky said.
But after watching such a tepid, timid, uninspired performance in what should have been their biggest game of the year, why wouldn't Mbakwe take his chances as a 2nd round/undrafted pick at the end of some pro team's roster or in the D-League? Why would he ever want to join this diseased gong show of a program? Dude's already got his degree.
Go ahead and disregard the nice things I said about this team yesterday.
The Next-Day Box Score: Stanford captures the NIT championship, 75-51. As our friend Craig astutely observed, "If they would have spotted us 30 points at the start of the game, we would've been right there in it at the end!"

The Verdict: Nine minutes into the second half, the Gophers had six points and eight turnovers. We checked in again with a minute left. Andre Ingram got rejected by the rim on a dunk attempt, and a Stanford guy sitting on the ground, singing Kumbaya to himself or something, "grabbed" the rebound. I didn't miss anything. This week's South Park was really good, though.
Posted by Bruff McGruff at 5:59 PM

Email ThisBlogThis!Share to TwitterShare to FacebookShare to Pinterest
Labels: Bruff McGruff, did i miss anything, dork nowitzki, gophers, humiliation, tubby