Did I Miss Anything? A Retrospective: Red Sox 11, Twins 2 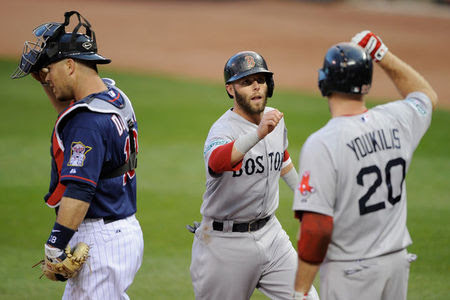 I'm really glad that my friend Silky had such a great time at the Twins-Angels game last week. He got to see a Twins victory, which must have been a lot of fun. I dunderheadedly decided that this would be the season I would become (part of) a (group of friends who went in on a 20-game pack and, subsequently and fractionally became a) Twins season ticket holder. What great luck. In honor of the Twins second 2-game winning streak of the year (Tigers SUCK!), here is a retrospective of the events that took place around Target Field while my dad and I sort of paid attention to a Twins blowout loss on April 24.

The situation: Red Sox starter Josh Beckett had just wriggled out of a bases loaded, 1-out jam by only giving up one run in the bottom of the 1st, preserving a 3-1 lead for Boston.

About the only thing that went smoothly at Target Field on this night was the Surly Bandwagon that slid down my throat between the 2nd and 3rd innings. Dad's more of a Bud Light kind of guy, but reports stated that he enjoyed his Mich Golden as well.

The Twins had already dug themselves a hole by the time Dad and I found our seats in left field, section 131, after our customary pre-game lap around the premises.

That night's Twins starter, Nick Blackburn, was coming off an elongated rest period, which historically has spelled trouble for his sinking fastball. Supposedly, it sinks more when his arm is tired and he throws it slower. "Why don't they throw him out there every third day, then? He'd be the best starter in the league," Dad astutely observed after I mentioned this following David Ortiz's 3rd inning 2-run moon shot that gave the Sox a 5-1 lead.

Matt Maloney relieved Blackburn after the starter put up one of those 3 IP, 8 H, 5 ER lines you see from pitchers whose teams lose 26 of their first 36 games in a year. Now, I doubt Maloney entered the game thinking, "I can put up that Blackburn line, but in half the time!"

But that's exactly what ol' Matthew did, giving up eight hits and five earned runs while recording just five outs. After the first batter Maloney faced, Mike Aviles, smacked a home run down the left field line, a baby started bawling a couple rows in front of us. My dad was not amused, "I would never bring a baby to a ballgame. If I did, I'd bring a roll of duct tape in the diaper bag."

Maloney gave up two more runs on four hits (three doubles!) in the top of the 5th inning before Gardy yanked him. A five-minute meeting at the mound ensued as Jeff Gray took his time walking to the mound, and Dad's attention began to wane: "What the hell are they doin'? Picking a bar for after the game? 'Hey, if we hurry this up, we can make last call!'...(pause)...I really like Gluek's."

The Twins trailed 10-1.  And the baby continued to weep. As did Chris Parmelee.

But the hometown team made a rousing comeback in the bottom of the 5th. Josh Willingham, the lone bright spot on the team this season outside of the emergence of our new 1-2 pitching punch of Scott Diamond and P.J. Walters, doubled home Jamey Carroll to cut Boston's advantage to 10-2. Justin Morneau couldn't keep the good times rolling, though, lazily flying out to left to end the half-inning and prompting Dad to utter in disgust, "Put him back on the DL. Hit a ball off his foot or something."

The Twins and babies weren't the only victims of Dad's whip-crack wit this night. When one young couple embraced for the requisite amount of length on the Kiss Cam to collect a rousing applause, Dad quipped, "Yeah, they BETTER be making out. Nothin' better to do tonight."

We left as Scott Atchison quickly set the Twins down in order in the bottom of the 7th inning, preserving Boston's 10-2 cushion. "Let's get out of here," my 58-year-old father said. "We can listen to the rest of this debacle on the way home.

...Actually, I think I'd rather listen to a rap station."

The next-day box score: Nicky Punto drew a walk in the top of the 8th inning as Boston scratched another run across on a fielder's choice to score the game's final run. A Sean Burroughs (Where is he now? LINK) pinch-hit double was the Twins' only hit over their final four frames.

The verdict: Dad and I rode in the Ramp A elevator down to his car along with a middle-aged couple who exited during the 7th inning. The husband told his wife, "Hit the button for level 'B." For buses. Or bottom."

Dad, without missing a beat: "Hey, 'bottom.' Like the Twins!"

We didn't miss anything.

Dad's Quote of the Night: "If I was at home right now, I'd be tipping back in the recliner, probably changing the TV to some Law and Order or something.

Thanks for the tickets."
Posted by Bruff McGruff at 7:45 PM