Do This, Not That: Bracket Crafting Tips from This Year's NCAA Tourney 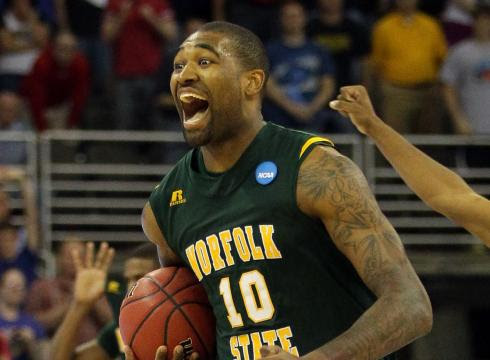 March Madness has been the best 19 days of the year each of the past 21 years. It will continue to hold this distinction until a Minnesota team either A) wins a thrilling, historic championship in Game 7 of a taut back-and-forth series, or B) the Vikings win a Super Bowl and every bar and restaurant in the state celebrates with the first ever Free Beer February in American history. To properly celebrate this event, I spend the time between Selection Sunday and the first Thursday tip-off compiling and crunching dozens of stats for each team in the field--except the 16-seeds, a strategy that almost backfired this year. SYRACUSE.


The barely attainable goal of the Perfect Bracket (odds: 9.2 quintillion-to-one) always dangles like a pumpkin muffin in front of my face. Usually until the first buzzer-beater busts that hope at around 1:45 pm on the opening day of the tournament. It would honestly be a better use of my time to bank on winning the next five Mega Millions jackpots in a row.
But my Candide-ish eternal optimism has given me the chance to ponder and reflect on what statistical factors might actually point toward those crucial first- and second-round (sorry...second- and third-round) victories. Wouldn't it be nice to have a neatly pressed sheet of paper at which to gaze longingly instead of a crumpled mass of obsolete eight-second analyses gone awry as the tournament enters its second weekend? So make sure to bookmark this post with the tag CLICK THIS LINK MARCH 17 2013, because I'm about to help you win next year's office pool 50 weeks early.
Factors That Matter:
1. Opponents' Field Goal %: Simply put, if the other team has a hard time making buckets against your tenacious D, it's not as big a deal if your team goes on a drought for a bit, and if your team gets on a roll, you can really bury a squad. The one seeds were all in the top 25 for this stat, Wisconsin (8th in nation) won a couple games, and Xavier (28th) also made the Sweet 16. Meanwhile, Duke (182nd) and Mizzou (223rd) gave up a significantly higher percentage than their upset-minded counterparts.
2. Having a court general that averages at least 3.8 apg: This stat first caught my attention when point guard Jason Richards led the NCAA in assists/game in 2007-08. You might remember him as Steph Curry's running mate during Davidson's improbable Elite 8 run. The second round was littered with court generals beating teams that couldn't cash in on this luxury, including Kwamain Mitchell beating Memphis, Isaiah Canaan besting Colorado State, and Peyton Siva beating Davidson (and New Mexico) (and Michigan State).
3. Record in 10 games immediately prior to tourney: Don't discount momentum in March. Florida was 4-6 in the 10 games leading to the tournament and almost made the Final Four. That might seem to torpedo this stat, but their first opponent, Virginia, was also 4-6 in those games. Many of the matchups involve teams within one with of each other in this range, but when there's a sizable discrepancy, then you see Murray State (9-1) downing Colorado State (6-4), Gonzaga (8-2) beating West Virginia (4-6), and South Dakota State (9-1) at least hanging with Baylor (6-4). The one caveat to this: Don't pick 13s and 14s to beat 3s and 4s based on this factor.
4. Ken Pomeroy's Adjusted Defensive Efficiency rating: Kenpom.com is a leading destination on the web for high-level statistical analysis. This factor ties in relatively closely with factor #1, but this stat measures, roughly, points given up per 100 possessions. This stat can help point out some of those potential upsets, like VCU (26th in nation) over Wichita State (18), Ohio (47) over Michigan (49), and South Florida (16) over Temple (93). The big outliers here: Creighton (182) over Alabama (9) and Florida (116) beating Virginia (5), but there were some extenuating circumstances (like Virginia only having 7 scholarship players for the game) that led to that loss.
5. Does your team have National Player of the Year Anthony Davis? Yes? I would pick this team to win 5 or 6 games over the course of the tournament. But since Davis will probably declare for this summer's draft by about the 3rd post-game interview question, this may be a moot point by next spring.

Factors To Forget:
1. Strength of Schedule: In one (granted, unprecedented) 3-hour span on the tournament's second day, Norfolk State (SOS: 331) upset Missouri (48), the Lehigh Mountain Hawks and their burlap sack-wearing cheerleaders (309) caused the nation to rejoice by offing Duke (6), and the Ohio Clark Kellogg's Son And Others (190) took out Michigan (1). But the bracket was littered with other examples of the meaninglessness of this stat, like Creighton (108) over Alabama (32), or Cincinnati (63) over Texas (11).
2. Turnover Margin: One might think that a team that thrives on picking their opponents' pockets while also taking care of the ball would get more possessions and, thus, more chances at points in a tight tournament game. And while the runaway #1 team in the country in TO margin, VCU (+6.5/game) pulled off one upset, they couldn't do two, losing to Indiana (+0.8/game). In other action, Kansas State beat Southern Miss (21st in nation), South Florida (307th at -2.5/game) won a couple games, and Mizzou (8th) lost to Norfolk (246th).
3. Free Throw Percentage: John Calipari was right not to worry about this stat with his 2008 Memphis team...until the last couple minutes of that year's championship game. Almost every team has at least one guy that can hit from an 80% clip for those pressure-filled late game situations. Also, almost every team has a couple big-minute guys that shoot 55-65%, and there's just too much skewing, too many brilliant/disastrous one-game performances to give this stat much credence.
4. Ken Pomeroy's Adjusted Offensive Efficiency rating: Either this was an extremely flukey season for evidence against the effectiveness of Kenpom's Adjusted-O stat, or you really should look elsewhere for notable factors next year. Some of the most efficient offensive squads coming into tournament were Mizzouri (1st in nation--uh oh), Wichita State (10th--oops), St. Mary's (15th--eesh),and Duke (9th--yay!). Of course, Kentucky (2nd), Florida (3rd), and Kansas (6th) fared pretty well in this stat, so it probably maintains some relevance heading into next year.
5. Longest win streak: Make sure the team you have going all the way has at least one 6+ game winning streak on the season. If they haven't won six in a row in the 30-35 games leading up to the tourney, odds are they won't magically get it together for the tournament. Outside of that, win streak isn't a very reliable stat for the 7-10s and 8-9s specifically. Purdue never won more than four games in a row in the season, but they took out St. Mary's (longest win streak: 12) with aplomb.
Posted by Bruff McGruff at 9:57 PM