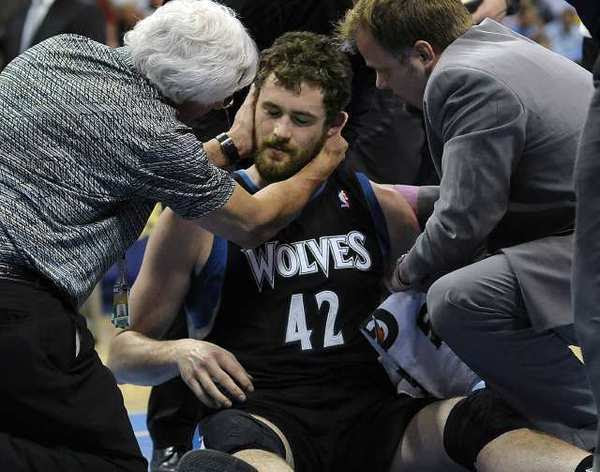 The journey home from Virginia was a somber one. Recent Ligament Induction Panel meetings have been long and taxing, and this one was no different. The weary cynicism was written on our faces as we stared out the rain-soaked car windows in silence. We were passing through Aitkin, one of the many beautiful small towns on the road up to the Iron Range, when a cacophony of bells broke our silence.


The ringing was clearly coming from the large bell tower that dominates the skyline in Aitkin. We pulled up to the adjacent church to investigate, and saw a procession of people dressed in black leaving the church. Their garments were not ordinary funeral black, though. We recognized black Timberwolves jerseys, black Vikings jerseys, all Minnesota sports teams, represented in black. Tony even thought he saw a Swarm jersey.

A man was greeting the mourners as they exited the church. He wore a black suit and a black fedora, and when we looked closer, we could see the fine stitching on his back, reading ‘Duerson’. After the last parishioner had left, he turned to us, his face old and dour with years of mourning, and motioned us to follow him inside the church.

“What’s been going on here?” asked the Bruff, “That looked like no funeral I’ve ever seen.”
“No funeral, indeed.” said the man, “No, this here was another meeting of the Select Minnesotans Against Concussions and Collateral Damage, also known as the Bell Ringers.”

The man went on to explain the purpose of S.M.A.C.C.D., and how they maintain the upkeep of the Minnesota Concussion Memorial. “Every time a Minnesota player’s bell gets rung, we ring our bell, and memorialize the concussion here, with a headstone.”

“Why do you use headstones?” I asked. The man looked at me for a moment, bewildered, then turned and led us silently out the back of the church, to the memorial.

He led us first to the headstones of Guillaume Latendresse and Pierre-Marc Bouchard, Minnesota Wild players whose concussions and subsequent extended absences were one of the many reasons of the Wild’s mid-season plummet from the top of the table in 2011-12. Their headstones were the same, each with the Wild logo and the French phrase "Mon monde à l'envers. Premières mon pieds sur la glace, maintenant ma tête."
Next he brought us to the Minnesota Twins sector of the memorial. There was Justin Morneau’s headstone, commemorating his concussion on July 7, 2010, which caused him to miss the rest of that All-Star season. It was noted on his headstone that he relapsed in 2011, and his concussion-like symptoms helped cause the worst numbers of his career and led him to miss 93 games that season.

Beside Justin’s headstone was Denard Span’s. He also dealt with a concussion and the resulting dizziness in 2011, and missed 92 games because of it. His headstone was marked with the Twins’ logo, and with the phrase ‘He never could find his center.'

The Vikings wing of the Concussion Memorial was next. The area set aside for Vikings’ concussions was larger than any other area of the memorial, and the plot was littered with headstones. Names like Steve Hutchinson, Asher Allen, Greg Camarillo, Hussain Abdullah, and Christian Ponder jumped out at me, but one headstone was different, and set aside from all the rest in a place of reverence.
Brett Favre’s moss-covered headstone was made of iron ore, mined especially from the nearby Cuyuna Range, and symbolized Favre’s iron-man durability in the NFL. His concussion on December 20, 2010, prevented him from finishing the season, and thus, ended his career. The injury was emblematic of an overall frustrating season for the Vikings; a huge let-down after the success of 2009. His headstone was laser-engraved with the phrase “My long-hated enemy is now my long-awaited friend. He was retired, then he wasn’t, then he was again, then he wasn’t again, and then he finally was. No wonder my head hurts.”

The rain was letting up as we moved to the newest addition to the memorial. Even though it was wet, you could still tell that Kevin Love’s headstone was newly cut and engraved. Love sustained his concussion on April 11th against the Denver Nuggets. The Timberwolves season, already derailed with the injury to Rubio, finally crashed and burned as Kevin slumped to the floor. His headstone read “His back grew weary with the weight of his team. His head grew fuzzy with the elbow of McGee.”

As we went back to our car, I turned and asked the man in black one last question.

“Why did you show us all of this? I thought this group was for select Minnesotans?”

“It is,” he replied, with a wry smile, “and I selected you. I could see it in your eyes. You young men had the look of true believers. I hope you’ll come back again, later rather than sooner, and ring the bells with us.”

With that, he tipped his hat to us, turned, and walked back to the church. We piled back into the car and headed south in silence, until I said, “Well, gosh, that was bleak. It’s no wonder Minnesota can’t ever seem to get ahead in sports.”

No one laughed. The pun wasn’t funny. And it was in poor taste.

But mostly it wasn’t funny.
Posted by SilkyJ at 4:52 PM