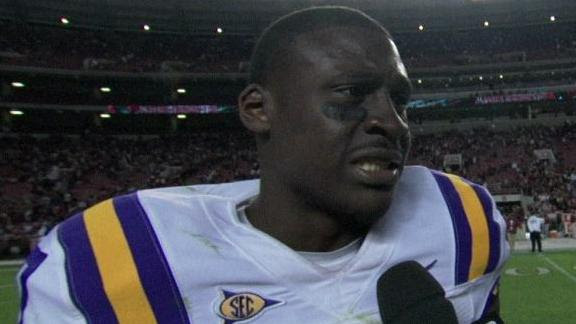 If that line weren’t enough to make you want the Vikings to draft Morris ‘Mo’ Claiborne, I’ve got a few more reasons here that will help you change your mind.

Let’s make that seven interceptions, because that’s all that our secondary had. The eighth INT, I’m sure you remember, was that freakishly amazing play by freakishly amazing man Jared Allen in the Chargers game. This one.  Jared Allen, who is paid quite handsomely to sack the quarterback, had as many interceptions as Asher Allen, Cedric Griffin, Hussain Abdullah, Antoine Winfield and Mistral Raymond. All men who are paid to intercept the quarterback.

It’s more than just numbers, though. You all saw the games; our secondary was nonexistent! How often did we see a guy cover an area, only to have the receiver run into open space to make the reception? How many times did an opposing quarterback look like he was running drills out there on the field?

I’m sorry I’ve had to dredge up all these bad memories. If you’re anything like me, you’ve been keeping to a strict regimen of alcohol and video games to make them go away.

Simply put, the secondary entered last season mediocre, with slight signs of promise, and after a season filled with injuries and issues, ended up in shambles. This offseason, the Vikings tore the whole house down and started over redid the bathroom and kitchen while keeping the structure intact painted the front door and called it new by replacing Cedric Griffin with Zack Bowman and Chris Carr. To be fair, Griffin was not the problem. It’s not his fault the Taints broke his knees. His replaces, though, do not inspire much confidence in the state of our secondary. Chris Cook may someday become a decent number one cornerback (the jury’s still out…), and I don’t know how many more injury-free and effective years ‘Toine Winfield has left in the tank.

This sets the stage perfectly for the Vikes to take LSU cornerback Morris Claiborne with the third pick in the draft. Mo is, by all accounts, the best defensive player in this draft class. He’s a true shutdown corner and a game changer on the defensive side of the ball. The only cornerback prospect in the last five years to come out as highly rated as Mo was his old teammate, Patrick Peterson. Claiborne may lack some of the flashiness his former teammate has, but he more than makes up for it with his superior technique and zone awareness. Peterson burst onto the scene last year as an electric return man; Claiborne isn’t as good as him (who is?), but he is certainly effective, averaging 25 yards per kickoff return, and returning his 6 interceptions for 173 yards and a touchdown.

Mo is the type of player that would come into training camp, day one, and have the number 1 cornerback position locked down as much as the receivers he’s covering (I suppose the same could be said about Asher Allen OH WAIT.). With Morris at the 1, Chris Cook would fit right in at the 2, Toine would be a great nickel back/safety (if our current safeties stay awful), and the secondary in general would look a lot better than it does right now. A stronger secondary would then lead to more time for pass rushers like Jared Allen to get to the quarterback, and would open up the safeties a bit more to come up and support the run. This is what I mean when I say that Morris Claiborne is a total game-changer on the defensive side of the ball, and is worthy of being the third overall selection in the draft.

Bold prediction: Morris Claiborne will have more interceptions next season than Jared Allen had last season.

Ok, maybe that’s not so bold, but there weren’t many Vikings last season that could stand up and say that.

The first round of the 2012 NFL Draft is at 7pm on Thursday, April 26th. Come back to the Sports Emporium all this week for extensive coverage of the Vikings’ potential draftees.
Posted by SilkyJ at 6:04 PM