MelAnChoLy in Minnesota: A Stroll Through the Ligament Graveyard

O I say these are not the parts and poems of the body only, but of the soul,
O I say now these are the soul! 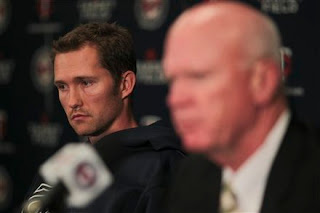 The drive to Virginia, Minnesota, takes about three and a half hours from my home in the southwest suburbs of Minneapolis. Tony, Silky, and I made the trip Wednesday afternoon with solemn business on our minds. We are three of the youngest members of the Ligament Induction Panel, and the news had just come through the wire that Twins pitcher Scott Baker would miss the 2012 season to fix and rehab the flexor pronator tendon in his pitching elbow.


In the northwest corner of Virginia's Greenwood Cemetery sits the Christopher Pratt Honorary Ligament Graveyard, named after the actor and Virginia native whose best-known roles--as Andy Dwyer on NBC's Parks and Recreation and as Scott Hatteberg in the movie Moneyball--have involved his characters sustaining debilitating injuries. The Ligament Graveyard was commissioned by a group of Minnesota sports superfans in early 2010 after a rash of ligament-related injuries torpedoed many of the hometown teams' seasons over the previous year. I can't divulge the identities of any other members, but suffice it to say, many are well-connected in the Minnesota politics, media, and business scenes. They also have the cash to spend on something as superficially frivolous as a Ligament Graveyard.

The idea behind the graveyard was to commemorate the players that were and the seasons that could have been if the athletes involved had not been subjected to the terrifying omen of having "Minnesota" emblazoned across their chests. What the Lincoln Memorial Reflecting Pool is to Washington, D.C., the Ligament Graveyard is to the Minnesota sports scene. Warped logic? Sure. But when your states' teams are as star-crossed as ours have been, you have ample time for nostalgic reflection and hypothetical analysis.

Our business was settled quickly. After a 20-minute meeting during which the main topic of discussion was whether Josh Willingham might be an optical illusion/mirror image of Jim Thome, we unanimously decided to grant Baker's flexor pronator tendon "ligament status." The injury was deemed to be much more specific, gruesome-sounding and not-made-up than the big topic at last spring's meeting: Joe Mauer's bilateral leg weakness. A cast of the ligament would be given a proper burial ceremony in a week's time, after the surgery has been completed. We projected a spring 2013 unveiling of the Baker memorial, the size and scope of which would be determined after the Twins' season concludes at our October meeting.

The timing of this next meeting is important; though each ligament is commemorated with a burial ceremony and a gravestone shortly after the injury, the size and timbre of each ligament's subsequent memorial depends on the relative impact and subsequent gut-check sustained by the team and its fans because of the injury. Great players on potentially great teams receive the biggest stones, so to speak. (The Panel has already decided on a thimble-sized plaque to commemorate Matt Capps' inevitable elbow blowout).

As Tony, Silky, and I started our post-meeting stroll through the graveyard, I realized that a visitor likely wouldn't guess this to be true, as Adrian Peterson's gargantuan limestone "Three-CL" structure dominates the entrance to the graveyard. Peterson's two incapacitating ligament injuries have come in 2007 (Vikings record: 8-8) and 2011 (3-13).

But since a plurality of the Panel considers Peterson as the state's most iconic, emblematic, and well-known personality (I thought Mauer to be the more apt symbol, but Silky and Tony sided with the Peterson backers), he was granted a large chunk of memorial real estate even before last year's late-season disaster against the Redskins. Now, with his 2011 ACL and PCL wing recently completed, Peterson's mausoleum-like complex takes up nearly a third of the Ligament Graveyard. A burly, olive-skinned security presence named Giancarlo keeps watch over the premises at all hours.

As we passed, Giancarlo was tending to the half-scale Eternal Effigy of Al Harris, the smoldering straw man whose likeness was loathed by Vikings fans for ending Peterson's rookie season with a low hit that ripped apart the running back's LCL. It was our first time viewing the new bronze sculpture of Adrian bowling over Arizona cornerback Patrick Peterson on his trademark 2011 touchdown scamper in the structure's torch-lit inner chamber, and the shadows dancing off the sculpture gave it an even more aggressive feel. The sculpture looked to have been recently waxed; clearly, Peterson's memorial has remained the best-kept on the premises.

In contrast, the next plot over contains perhaps the worst-kept memorial on site: that commemorating Jared Allen's 2008 MCL sprain caused by a low block from Detroit Lions turnstile Gosder Cherilus. A sizable portion of the panel didn't think the injury even merited inclusion in the graveyard, but an artist's rendering of a plastic-molded pair of legs perpetually stomping a Detroit #77 jersey like some kind of visceral, never-ending wind-up toy won over a majority of the group. Sadly, the mechanisms inside the leg malfunctioned shortly after the statue's unveiling, and the politics of the panel have stalled their replacement.

Cedric Griffin's two torn ACLs are also symbolized by a pair of legs--two 4-foot-high brass statues perched precariously on a short marble base. The left leg points toward New Orleans, the site of Griffin's 2009 injury, and the hamstring came to a tapering, rounded point, like a big middle finger pointed toward the dirty Saints. Meanwhile, the right leg crosses in front of the left and faces east toward the Meadowlands, where Griffin's 2010 season ended. The left leg served as a primitive release of frustration after the 2009 NFC Championship Game, but now the sculpture looks as awkward as it sounds, like the lower half of a giant with a staph infection set to take a tumble. I blame the Jets. And the Saints again, because why not. Screw the Saints.

New Orleans was also the site of Al Jefferson's gag reflex-inducing ACL tear in early February 2009. Jefferson's memorial is simple: a laminated copy of the Timberwolves' January 2009 schedule, where the team had seemingly turned a corner in its rebuild after the Kevin Garnett trade. The team went 10-4 that month, and Jefferson was averaging over 23 points and 11 boards a game as the squad's dominant post presence. Nine days after that magical ride concluded, Jefferson hit the deck late in a match-up against the Hornets, clutching his knee and writhing in pain. The Wolves lost 25 of their last 32 games without Big Al. It was the last bit of forward progress shown by the Wolves until the arrival of the Catalan Conservator.

Alas, Ricky Rubio's 2011-12 season met its tragic end just over a month ago in the waning moments of the Wolves' most meaningful game in years. We passed the site where Ricky's sculpture is currently under construction, and the Panel spared no expense to commemorate the thrills and positive vibes with which the Spanish Assassin has already blessed us. I can already tell that the Rubio sculpture, when completed, will be my new favorite; the mock-up we've seen depicts a smiling Ricky bouncing a pass between Kobe Bryant's legs to an open Kevin Love while Nikola Pekovic clotheslines Bryant with his Templar tattooed arm and a nearby referee tweets his whistle and points an arm at Black Mamba.

A considerably smaller amount of schadenfreude was experienced as we observed the memorial for star Gopher forward Trevor Mbakwe, whose 2011-12 "first" senior season ended in a heap on the wooden floor of Orlando's HP Field House during the championship game of the Old Spice Classic early-season tournament. The prolific rebounder's injury is remembered through a single corrugated cardboard box nailed into the cemetery ground with four tent spikes. I sort of remember the symbolism having something to do with Mbakwe's acumen at boxing out opposing defenders; I definitely remember being quite hammered at the Panel's annual Christmas party when we voted on that memorial.

Other smaller basketball memorials dot the acreage, including a silver-dipped headband boxed in by a gold-plated picket fence (Corey Brewer, ACL, December '08), an iron casting of Minnesota Lynx mascot Prowl sitting on a concrete step with her head in her hands (Seimone Augustus, ACL, June '09), and a wood relief carving of a Canadian bull moose accidentally stepping on a gopher (Maurice Walker, PCL and meniscus, December '10).

Though the sport of basketball has claimed the most victims in the graveyard--and barring any more late-season Timberwolves shenanigans--the Minnesota Twins will take over as the most-represented single team once Baker's memorial is constructed. The Twins' wing of the cemetery takes up the entire northeast quadrant, and the three existing memorials are connected via a stainless steel walkway that served as a trough in a men's bathroom at the Metrodome for over 20 years. The "honor" fell to Tony, Silky and me as the Panel's three youngest members to "restore" (read: clean with a toothbrush) the stretch of steel for its repurposing at the graveyard.

Francisco Liriano's memorial is the second largest on the grounds, as his electric rookie campaign in 2006 (12-3, 2.16 ERA, one-half of arguably the Twins' best-ever 1-2 pitching punch) came screeching to a halt when a balky elbow--and, eventually, the diagnosis of Tommy John--signaled the end of the Twins' last best chance at postseason glory. At Liriano's memorial, an old decommissioned cannon from Fort Snelling houses a laser pointer that shines a red light into an alabaster Joe Mauer's mitt while a blindfolded, nameless, irrelevant batter stands by helplessly, symbolizing one of the Franchise's 144 strikeouts that season.

Joe Nathan's right ulnar collateral ligament is also commemorated in the Twins wing with a baked clay horse's head, signifying his several years of service as the workhorse at the end of the 'pen and his infamous cheek-flapping facial tic that resembled a sneezing equine. The flame-throwing closer's spring training elbow troubles cast a pall on a promising 2010 season and threw that year's bullpen into disarray. Jon Rauch did a passable job of holding down the closer's role, but the Twins' brass felt an upgrade at the position was necessary for a playoff run. Enter Fat Capps. Exit Wilson Ramos, one of the majors' most talented catching prospects. And exit the fool-proof backup plan for Mauer's inevitable injury-plagued 2011 year.

As we came upon the Kyle Gibson memorial (a stale bucket of movie popcorn, signifying how Twins fans didn't even get the opportunity to "getcha popcorn ready" to watch the potential ace at the major league level), the three of us knew we had a decision to make. The ligament graveyard was running out of space, and we and the rest of the panel both dreaded and grew weary of the inevitable additions that will have to be made to the cemetery in future years.

Perhaps our weariness has transformed into cynicism over the course of seven decidedly unlucky, soul-sapping sports years coming and going with little to add to our dusty trophy cases and too much collateral (and cruciate) damage to our favorite teams' most crucial and beloved members.

We decided that our October recommendation to the panel would be to erect Baker's memorial on a patch of clover near the northern point of the graveyard that, on Wednesday, was strewn with a handful of wayward golf balls that had apparently been crushed by big hitters going for the 8th green at the adjacent Virginia Golf Course. Fitting, we thought, for a pitcher many refer to as "Moon Shot Scott."

As we drove south down County Highway 53 on our way out of town, we could hear the strains of Virginia's city band at the Olcott Park bandstand, which sits directly east of the cemetery. It sounded as though they were practicing the orchestral version of an old Tori Amos song for the upcoming burial ceremony.

Baker baker, baking a cake
Make me a day, make me whole again...
Posted by Bruff McGruff at 8:42 PM