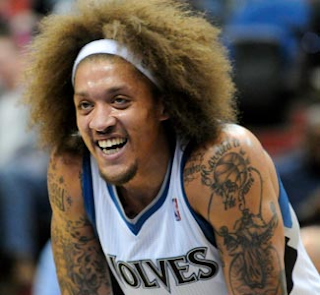 Aptly referred to as “The Illustrated Man” by MSE website creator, Spencer Broughten, Michael Beasley has a colorful personality, a sculptor’s touch with the basketball, and enough tattoos to presumably warrant “random” screenings from the TSA before team flights. He is known as an underperforming high draft pick who can score in bunches, but doesn’t have the mind for greatness. He is also known for incurring several drug charges, including a possession of marijuana ticket he received in Minnetonka last summer. Beasley is set to be a restricted free agent following this season and would be due $8.3 million should the team choose to offer him one more year. Herein lies the dilemma: Based on his statistics, he is not worth $8.3 million to the Timberwolves. However, there is a side to Beas that many people are not familiar with, and it is one of several reasons the Timberwolves should resign him this offseason.


What is this secret attribute he possesses? Personality. He is genuinely liked by his teammates. This Timberwolves squad has something Minnesota fans haven’t seen in a basketball team since Kevin Garnett led the Wolves to the Western Conference Finals in 2003: Chemistry. Not only have ball movement and efficiency improved, but there is a noticeable friendship between everyone on the team, making them collectively easy to root for. Beasley is a giant part of this team relationship.

There is no statistic for it. There is no measurable quality to analyze. It can only be noticed during the games, as time and time again, Beasley is seen rooting his teammates on. He cracks jokes constantly, he dances around, and he cheers louder than anyone when someone hits a big shot. At first glance, some of Beasley’s antics may be mistaken for aloofness, and sure, he isn’t the most focused player of all time. The positive manner with which his teammates react to his actions serves as a reminder of his worth. Besides, there’s no joking when he puts up stat lines like this.

Michael Beasley keeping the mood light on the bench.
Since being relegated to bench status by coach Rick Adelman early this season, Michael has not only accepted the role, but flourished in it. Most egotistical NBA stars would not react to such a move as appropriately as Beasley did. In fact, he has taken it as an opportunity to improve his all-around game. As a starter this season, he has shot 39% from the field. As a reserve, he is averaging over 45%. This improvement can be attributed to better passing and a newly found team-first attitude. His assists per 48 minutes went up from 1.7 as a starter to over 2 as a reserve.

More importantly, the team wins when he is around. In the 19 games Beas did not play this season, the Wolves are only 7-12. They are 18-19 with him, and over .500 when he contributes off the bench.

No one denies his talent, and at age 23, he is far too young to simply “let go.” He is a career 46% shooter who has shot over 41% from three-point range this season, a skill the Timberwolves desperately need. He is an asset off the bench when the team needs some instant offense, and he gladly accepts that role. His one major knock, the threat of drug allegations, seems to be a thing of the past since former NBA player Norm Nixon took Michael under his wing. Together, Beasley has stayed out of trouble, matured into his role, and found a true home here in the Twin Cities. Now it’s up to the Timberwolves to keep it that way.

My name is Tony Davis, and I, too, am a huge Minnesota sports fan. It is my pleasure to contribute to something I am so passionate about, and I cannot wait to be a part of this website’s future. It should be a fun ride, if nothing else. Thank you Spencer for having the motivation to get this started, and in turn, helping me to write stories again.
Posted by Tony Davis at 4:58 PM